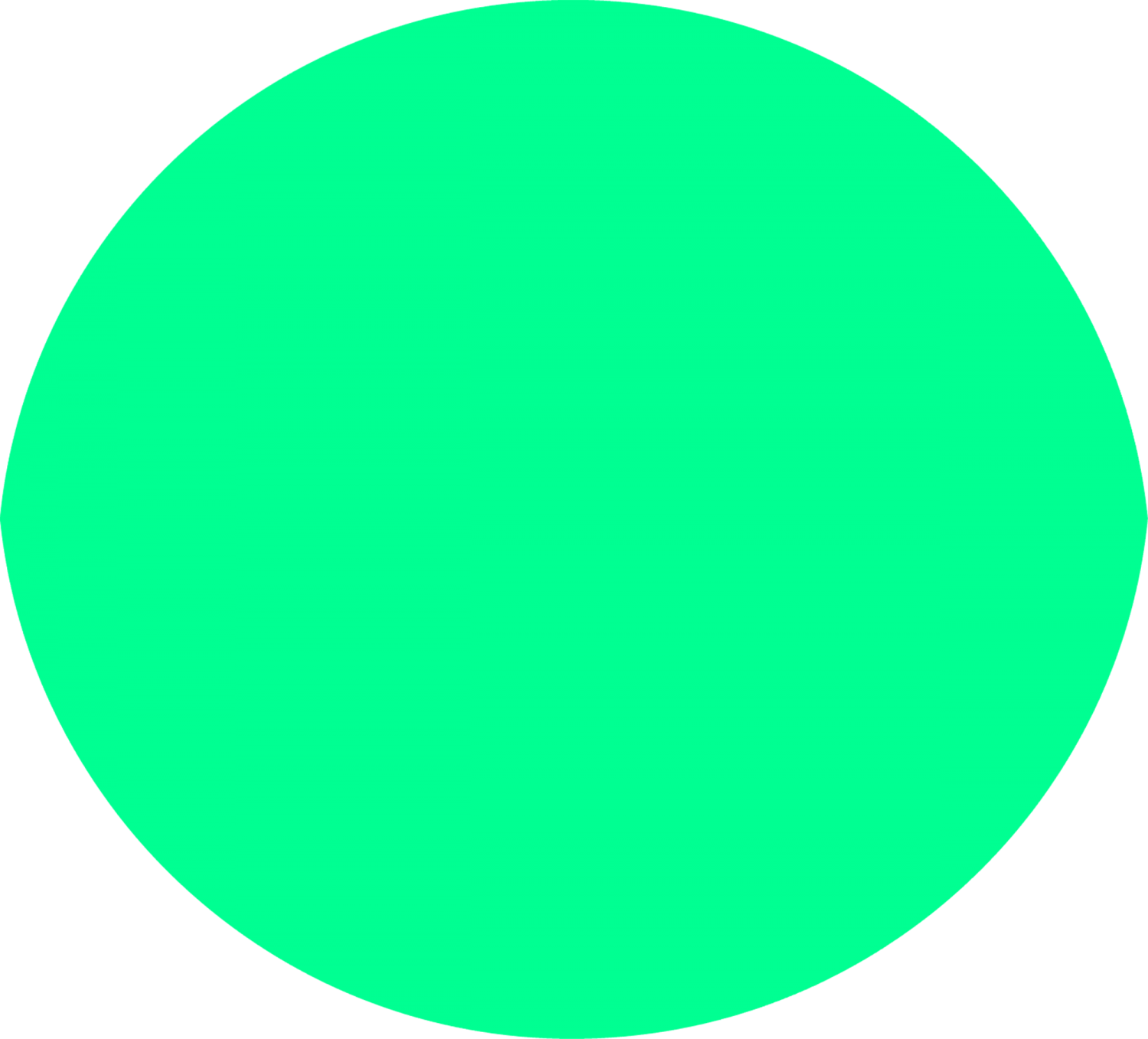 Ka’a Body: Cosmovision of the Rainforest 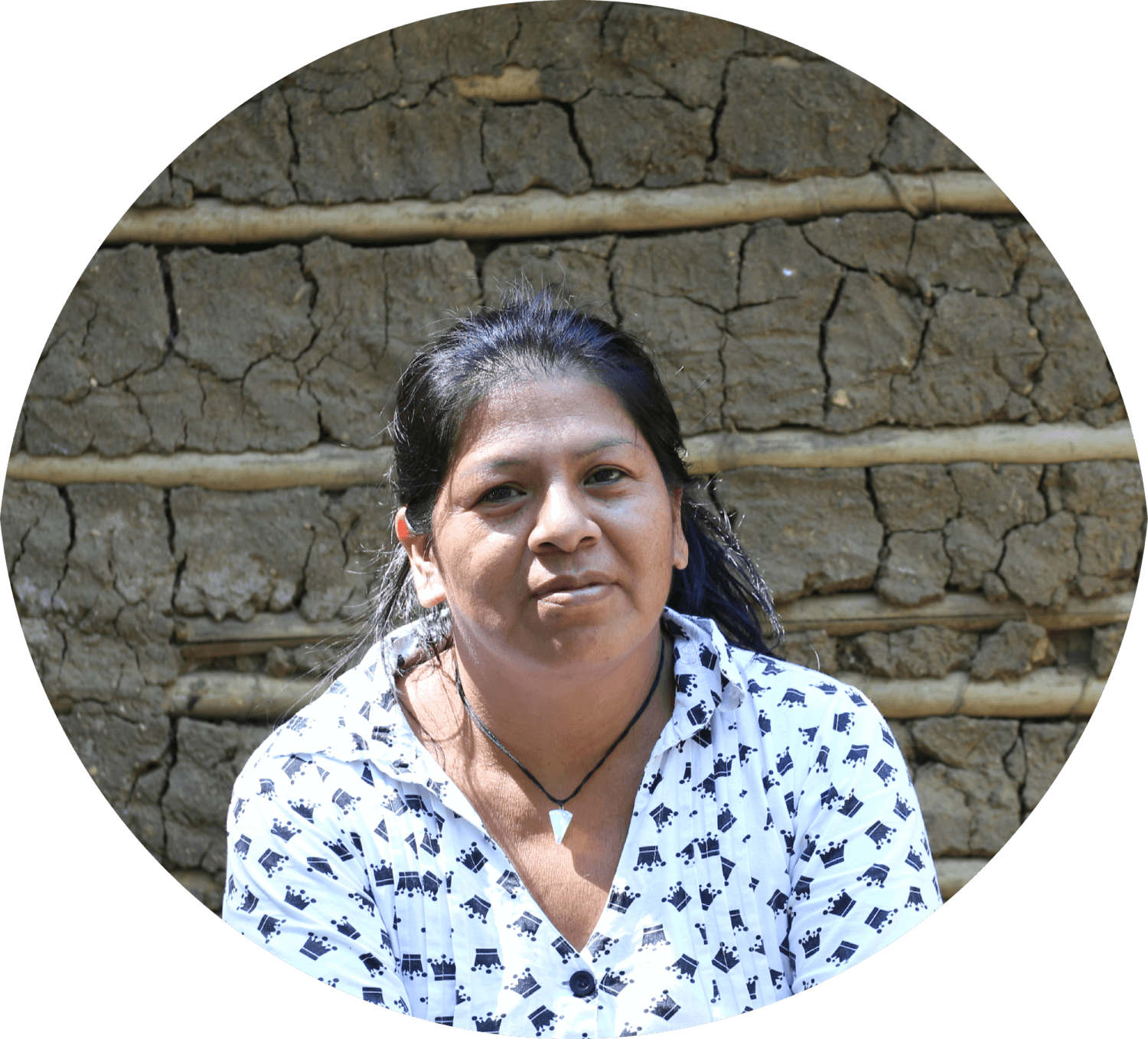 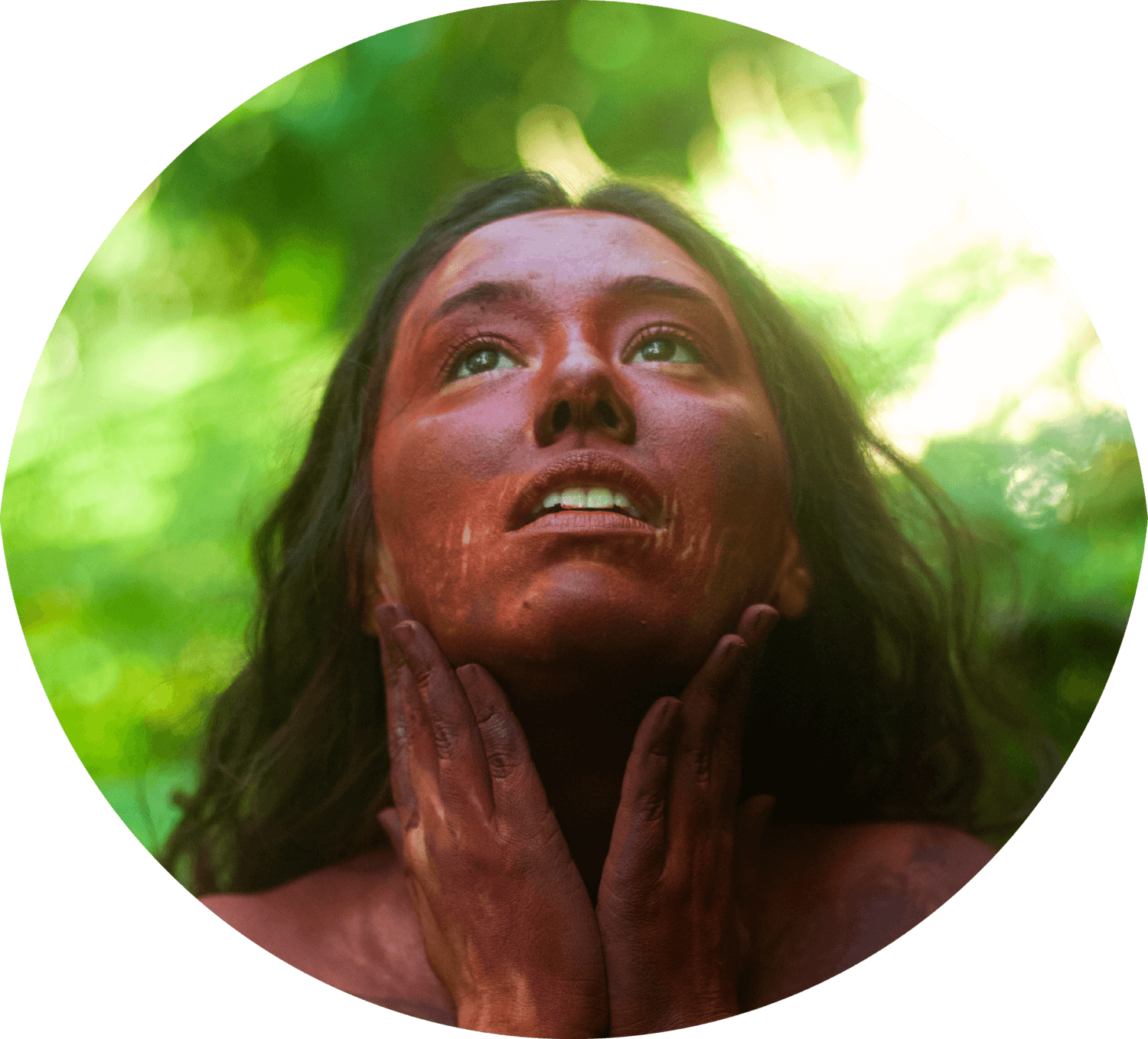 In association with Paradise Row

Radicants presents Ka’a Body: Cosmovision of the Rainforest (9 November 2022 – 14 January 2023 ), a significant, touring, showcase of art, culture and thought by Indigenous Brazilian artists and the creative networks that surround them. The exhibition resonates with the urgent situation in Brazil today, especially in regards to the ongoing and severe infraction of Indigenous lands and rights and the record rate of Amazon deforestation reported in the first semester of 2022.

Curated by Indigenous anthropologist and curator Sandra Benites (Guarani Nhandeva) and Brazilian artist Anita Ekman, the exhibition symbolically presents the twinned subjects of body and territory as a way of establishing a dialogue between the indigenous and nonindigenous on the history of the Brazilian Rainforests (Amazon, Atlantic Rainforest and Caatinga).

The exhibition proposes that, since the European invasion of the Atlantic Rainforest on the east coast of Brazil (a process in which France played an important part), the rainforests have been seen primarily as sources of commodities and that the complex cosmovisions of indigenous peoples about what forests are and what they mean, have been violently silenced.
In an act of cultural recovery Ka’a Body brings to light the histories of Indigenous resistance to colonization and commercial exploitation and the Indigenous cosmovisions they were defending. The work of internationally acclaimed artist Denilson Baniwa, for example, with acute and dark humor, aims to both underline and revise the familiar, pernicious and problematic images and ideas about the forests and their peoples that have run, unchecked, within the global imagination since they were (largely) constructed by 19th century expeditions by European and North American men.
Expansive and inclusive in its representation, the exhibition encompasses documented performance, film, photography, painting, printmaking, sculpture, and traditional indigenous arts.

Benites and Ekman focus especially on platforming the work of Indigenous female artists. It includes artists both known in the contemporary art scenes and artists and collectives who have not previously shown in commercial or international contexts.
In some cases, works have been especially commissioned by Benites and Ekman for Ka’a Body. One outstanding example is by the AMITIKATXI collective of female artists from the Tiriyó, Katxuyana e Txikiyana peoples (Tarëno and Pïrehno in their own languages) from the Tumucumaque indigenous land reserve in Pará state and their neighbors, the Kahyana, Katxuyana, Tunayana, Wayana and Aparai people. The piece is a delicately and beautifully articulation of a Sumaúma (the largest tree in the Amazon, which can reach 70 meters in height) rendered in beads sewn onto the red fabric that makes up the skirts of women on feast days.

The work was created during the height of the early days of the COVID-19 pandemic and so the members of the collective, hailing from across a vast area of forest, collaborated via video conferencing and social media on the design, direction and production of the work. As intended by Benites and Ekman the commission platformed the agency of the members of the collective and created the opportunity for their cultural expression to be seen in the new context of contemporary art and also internationally.
The work of another collective of female artists Kume Assurini e Muruawi Assurini do Kujy Ete (Coletivo de Mulheres Awaete e Constelar Ancestral Rede Cocriativa entre Povos da Floresta) engages with the ancestral visual culture of graphic pattern of their nation.
Patterns that were once articulated as body painting (engaging with the theme of the ‘body’) are reiterated on canvas, thus bringing together the past, present and future of the sacred geometry the Awaete people that embodies much of their wisdom. In strategy employed by many of the artists and collectives in the show, contemporary art becomes a vehicle for the preservation and reiteration of the intangible heritage of their culture. Similarly Judite Carlos da Silva has created an extraordinary textile work that functions as a visual arc or archive of the sacred patterns of the Huni Kuin, with multiple patterns on the one textile. The patterns were woven using ancient techniques and with the direction of the elder women of the nation, transferring their knowledge of the form and meaning of the patterns into the work and to the artist. During the pandemic many Indignous communities lost many elders and with them, untold knowledge and experience. A stunning and powerful image of a ritual performance from Anita Ekman’s Ocher Project featuring Indigenous actress Sandra Nanayna Tariano in the Parque Nacional da Serra da Capivara (where the traces of human culture from 48,000 B.C.E.) performatively investigates and riffs on the relationship between body painting and rock art painting and the role of women in the art and history of the South America continent. The idea and materiality of the ocher in the work serves as a link between the earth’s body and the female bodies which are central in many indigenous cosmovisions, among them the Guarani cosmovision, as defined by Sandra Benites.

Moving beyond representation into the realm of economic and social relations, the Ka’a Body project manifests, in its internal relationships, concept and structure, the collectivity at the heart of many Indigenous cultures. The artists and partners also redistribute a portion of sales to support the project itself and offer the exhibition as a platform for the raising of funds and awareness for NGOs dedicated to Indigenous rights and culture in Brazil. Ka’a Body is a portal between two distant yet connected worlds: the vast, complex world of the rainforests of Brazil (the Amazon and remnants of the Atlantic Rainforest) and Europe, also vast and complex, which, as a centre of global capitalism, profited from these forests on its path to power and dominance. 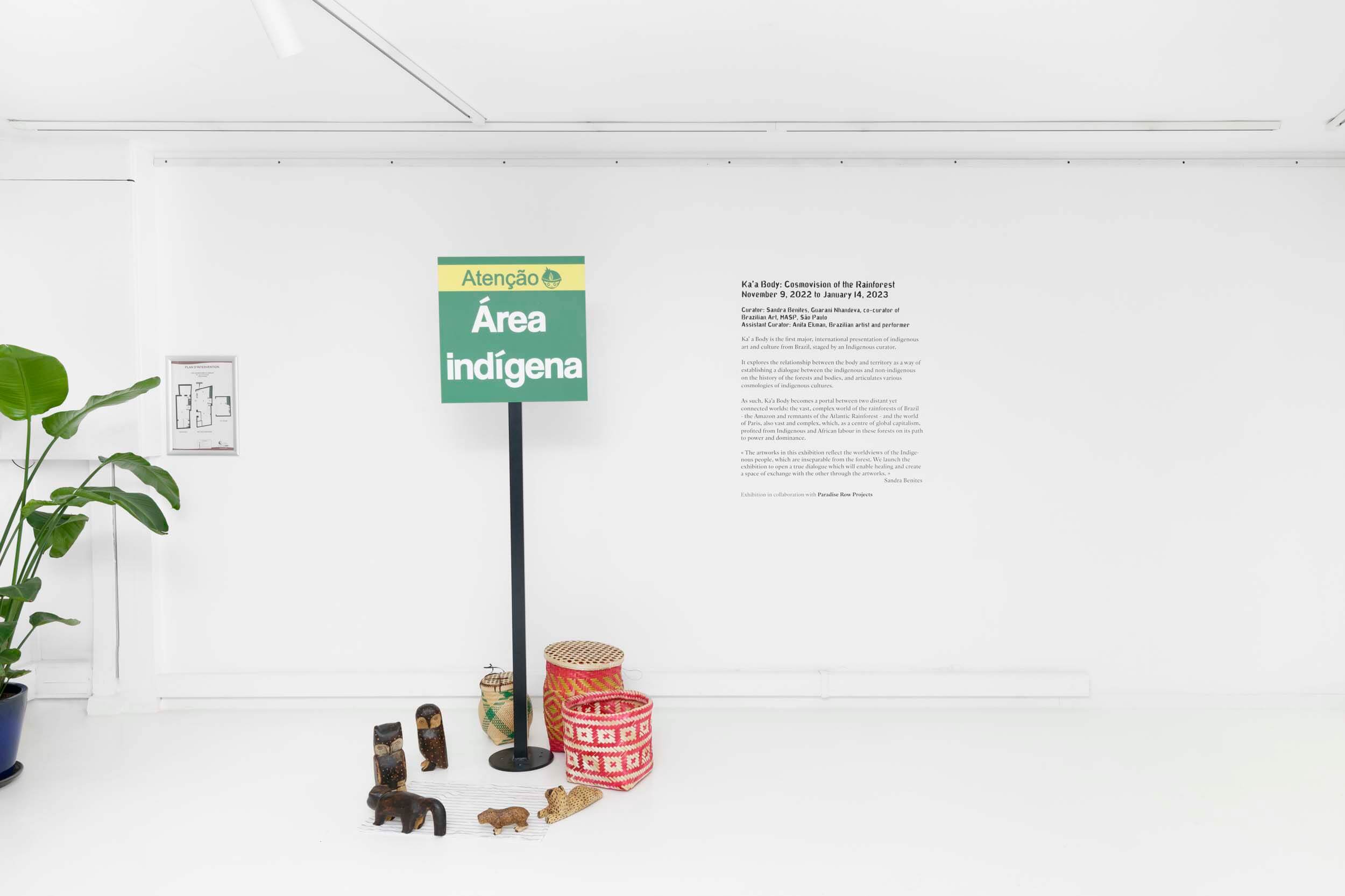 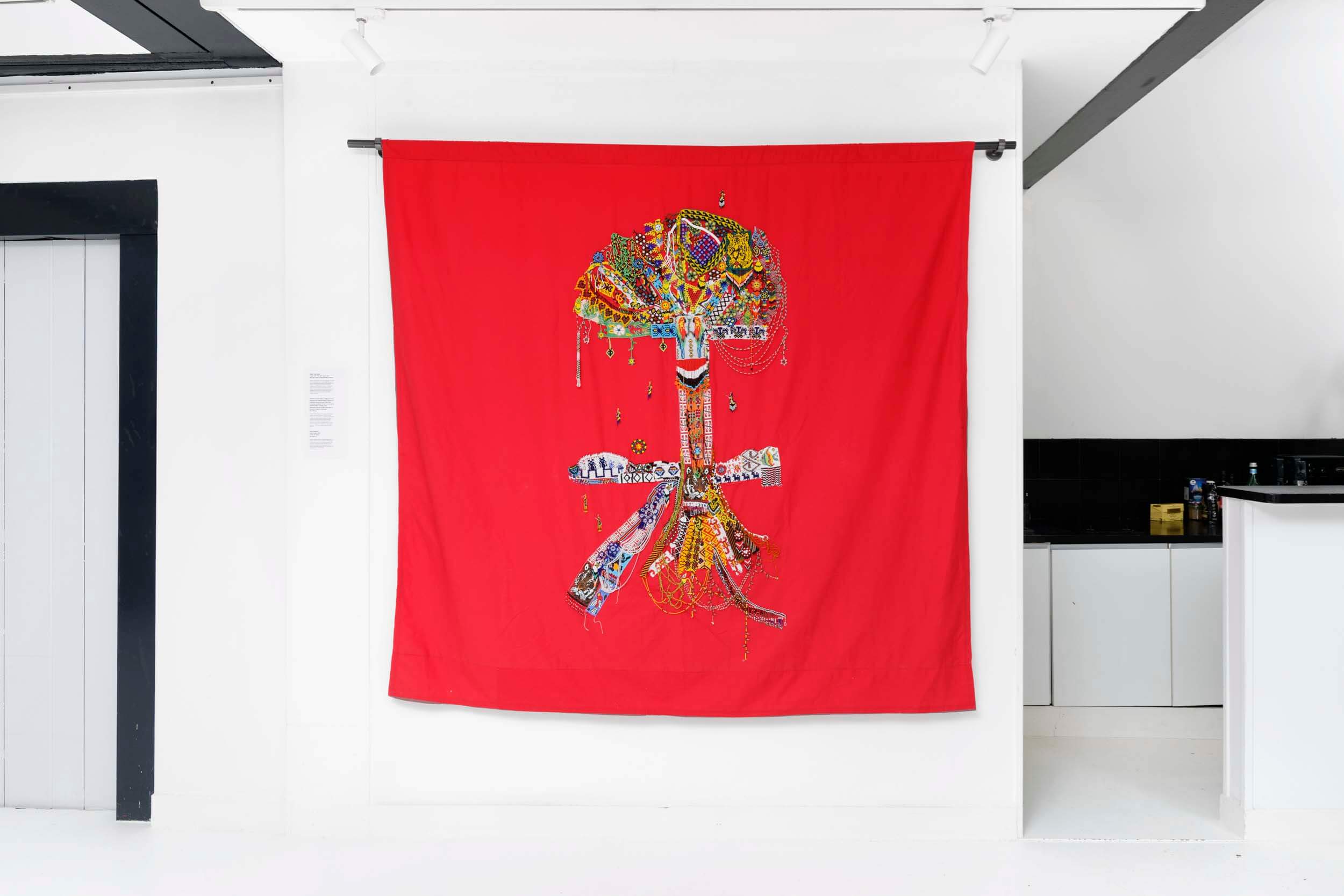 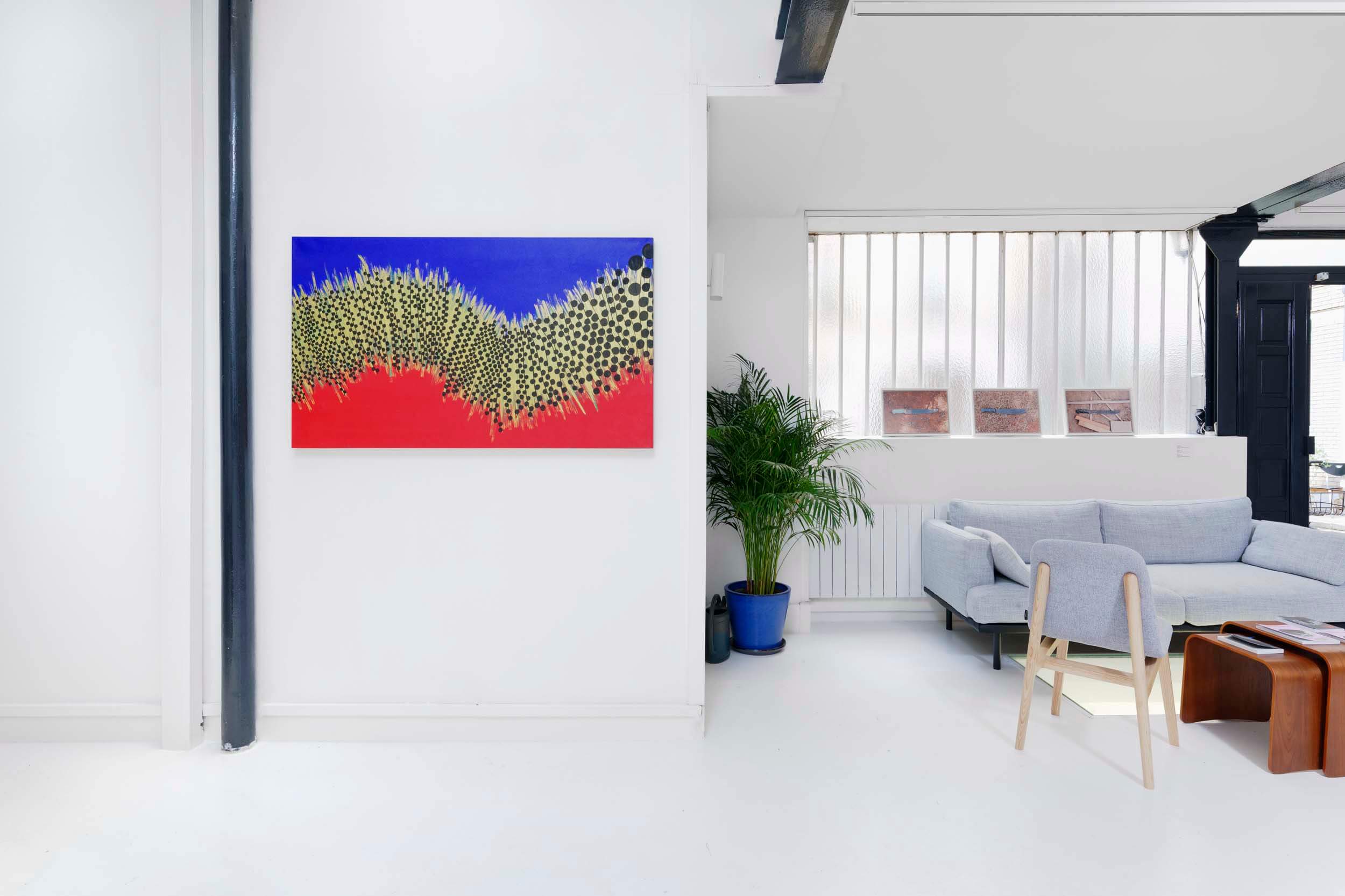 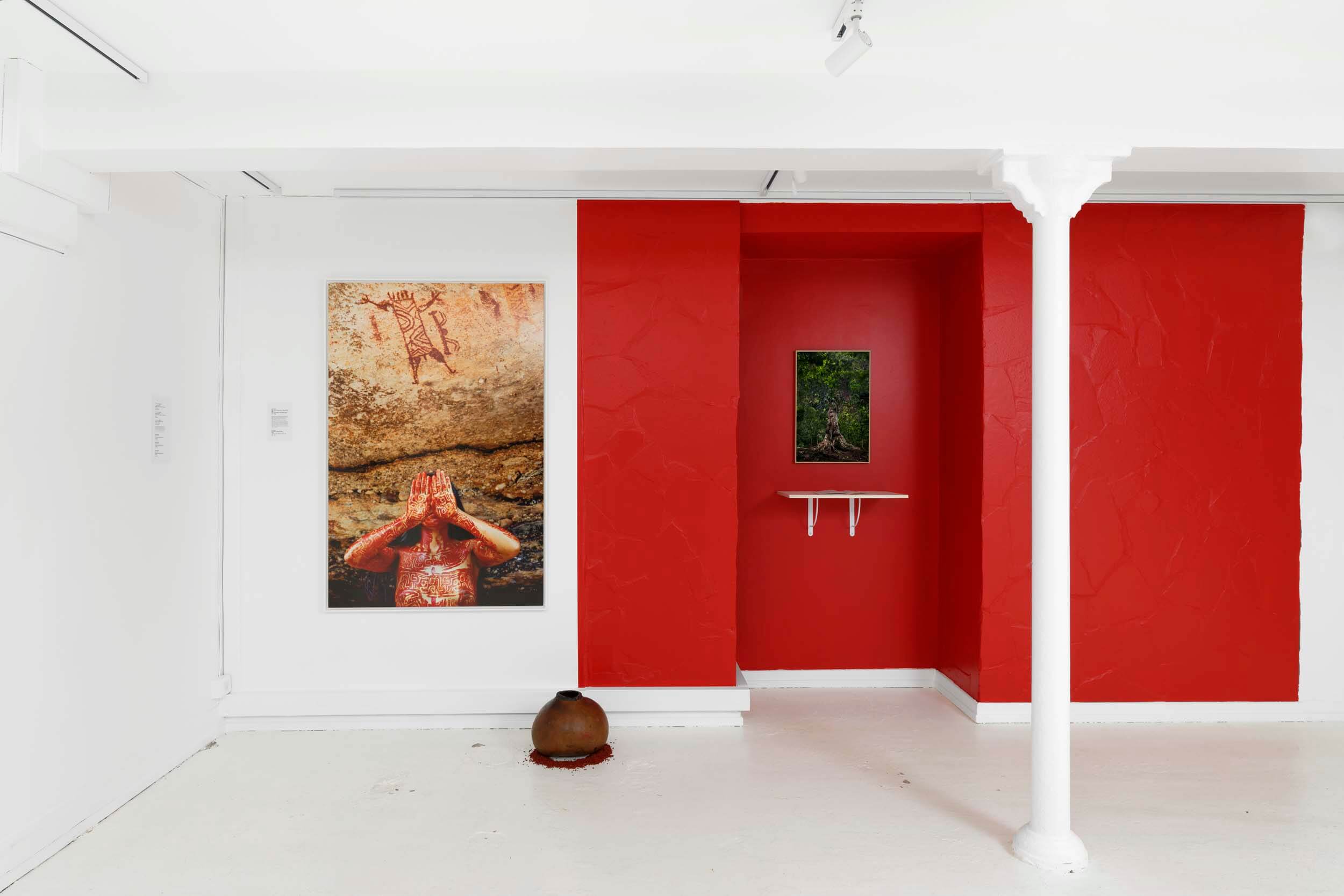 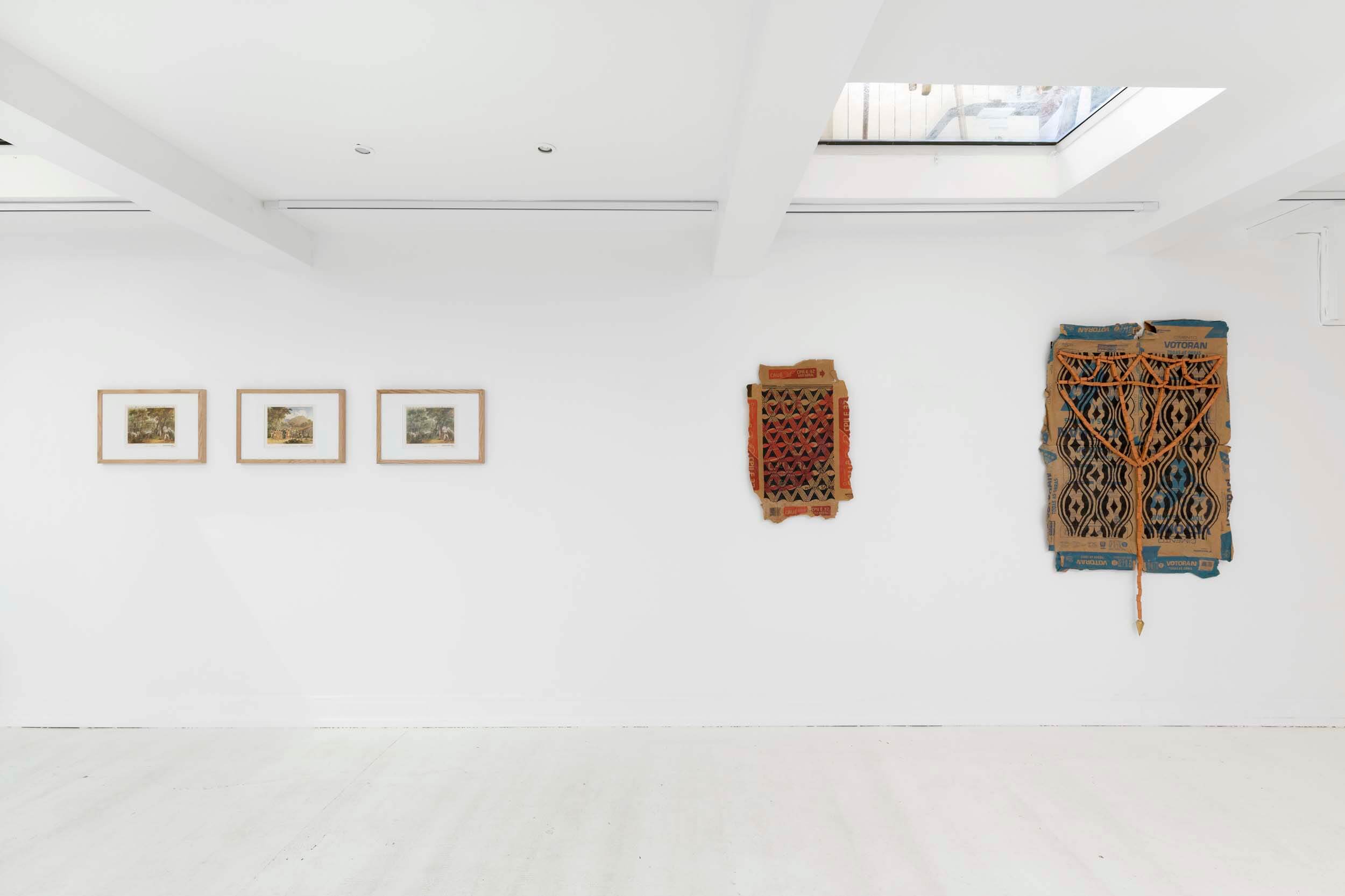 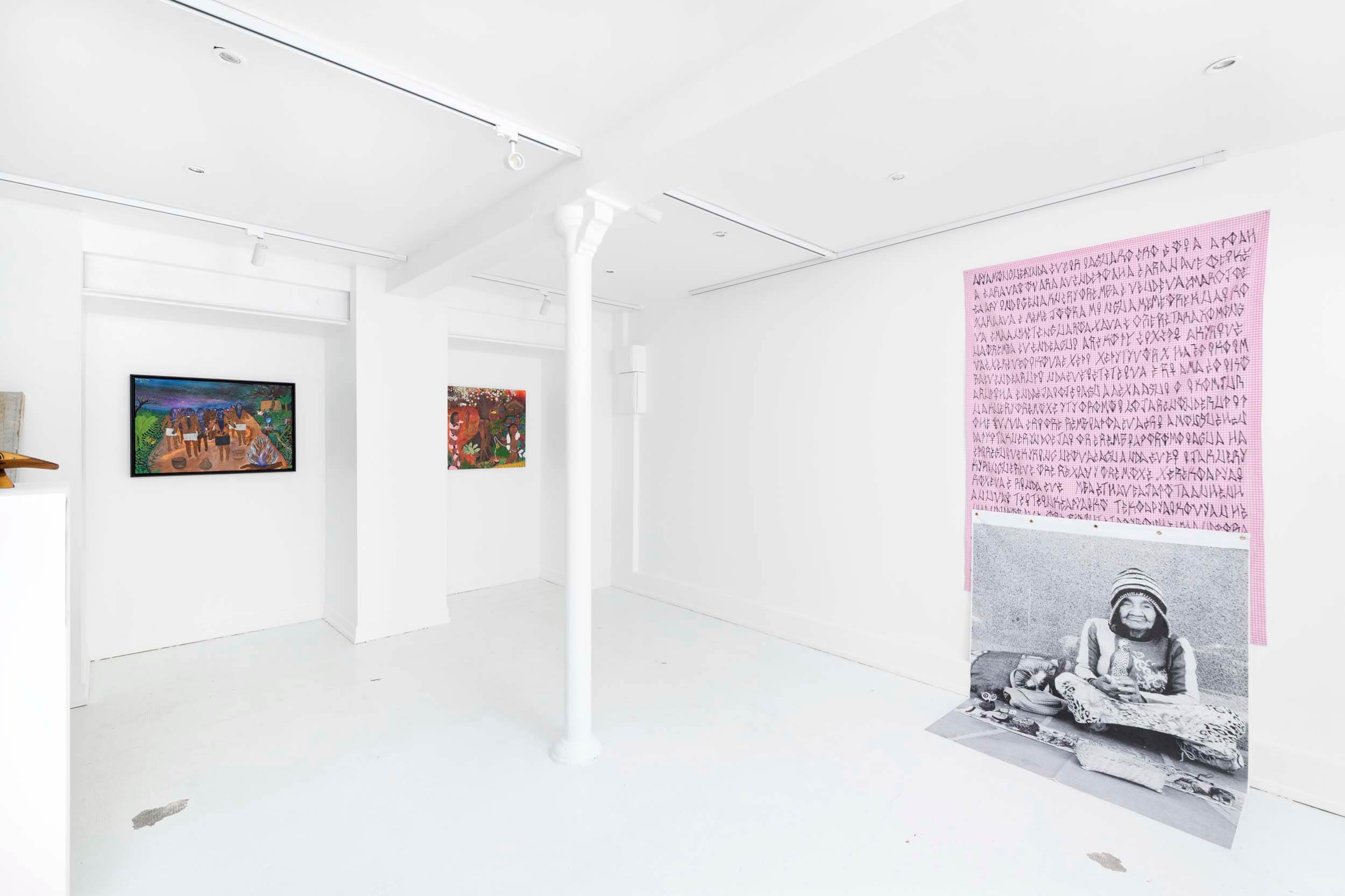 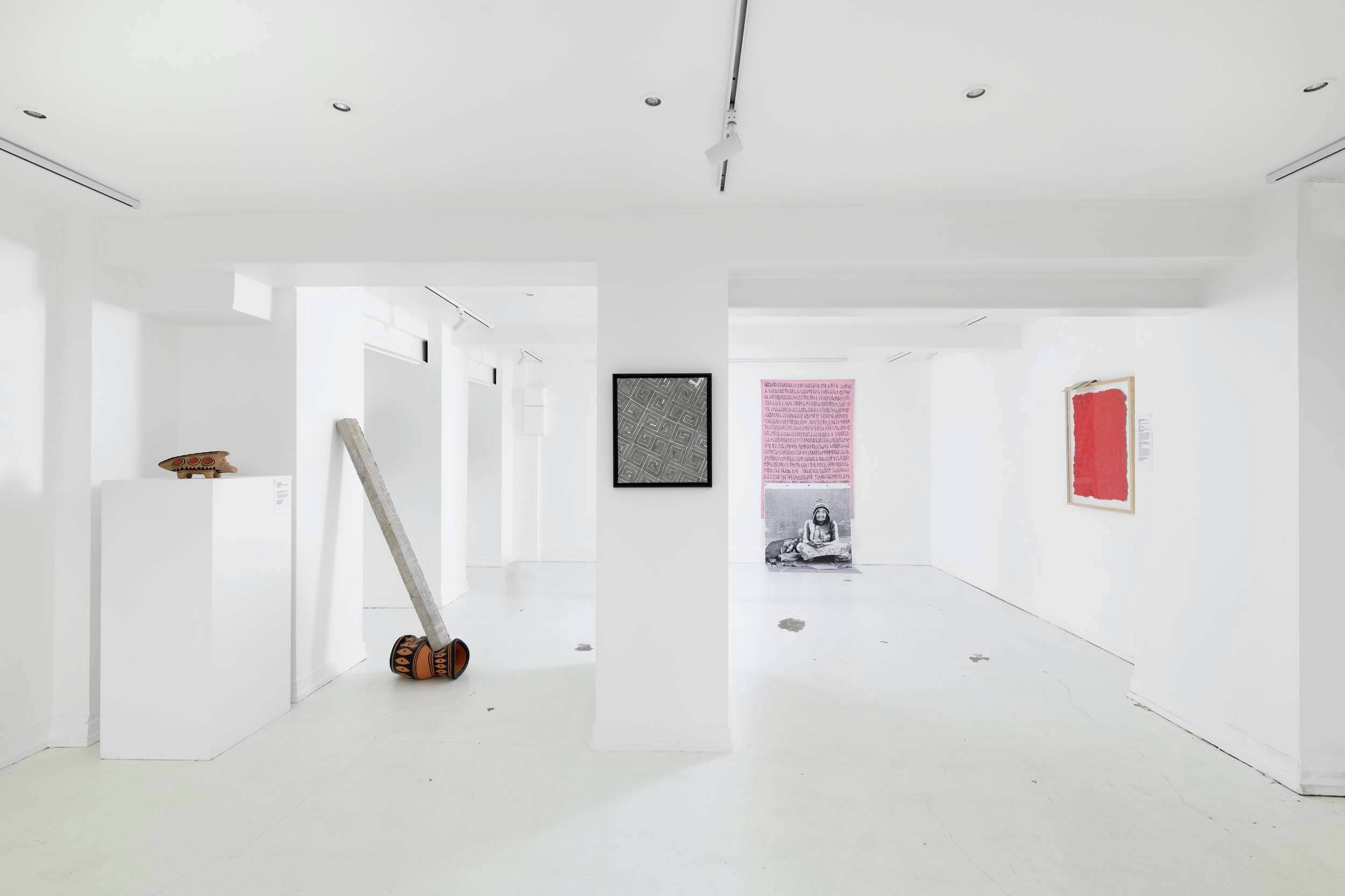 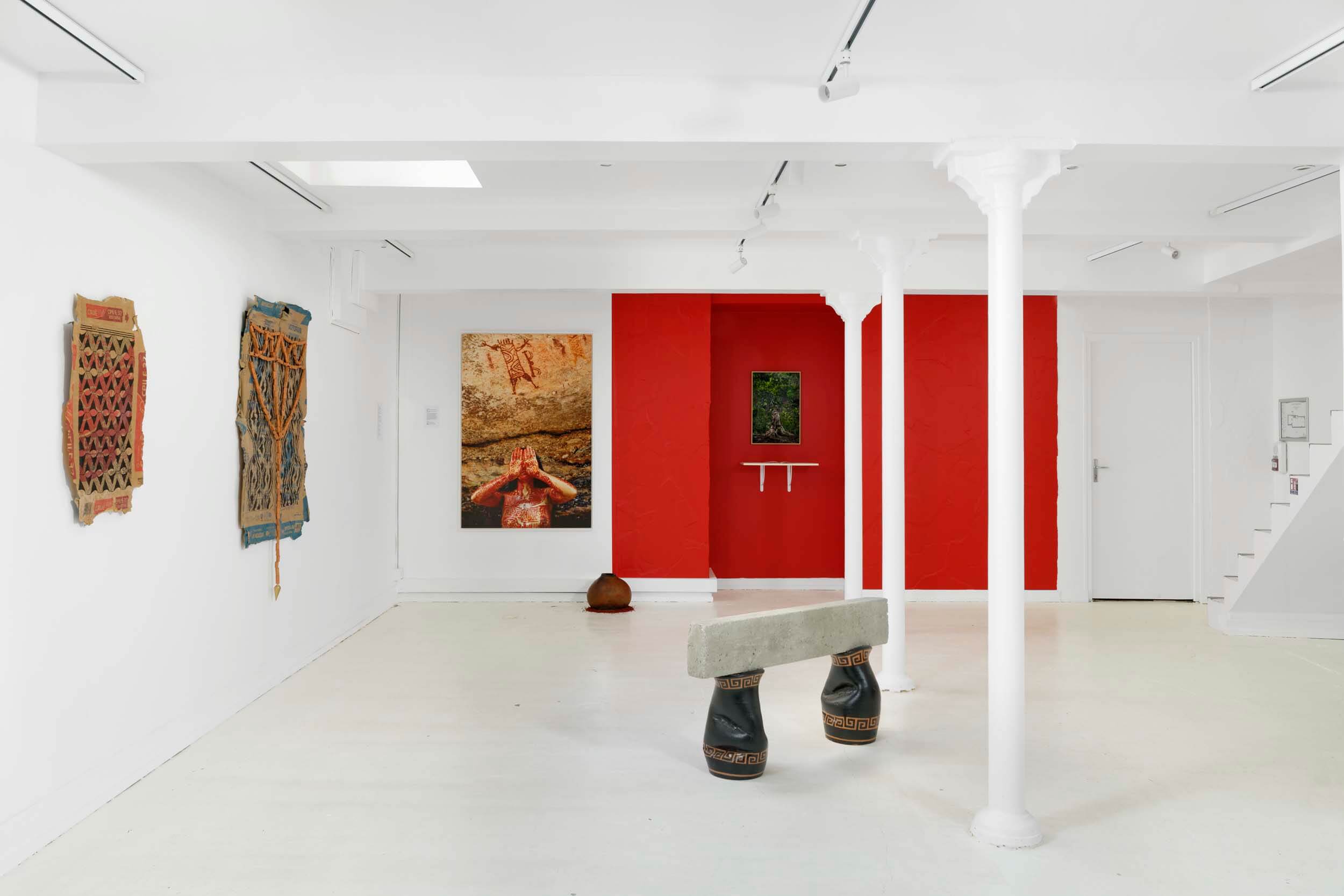 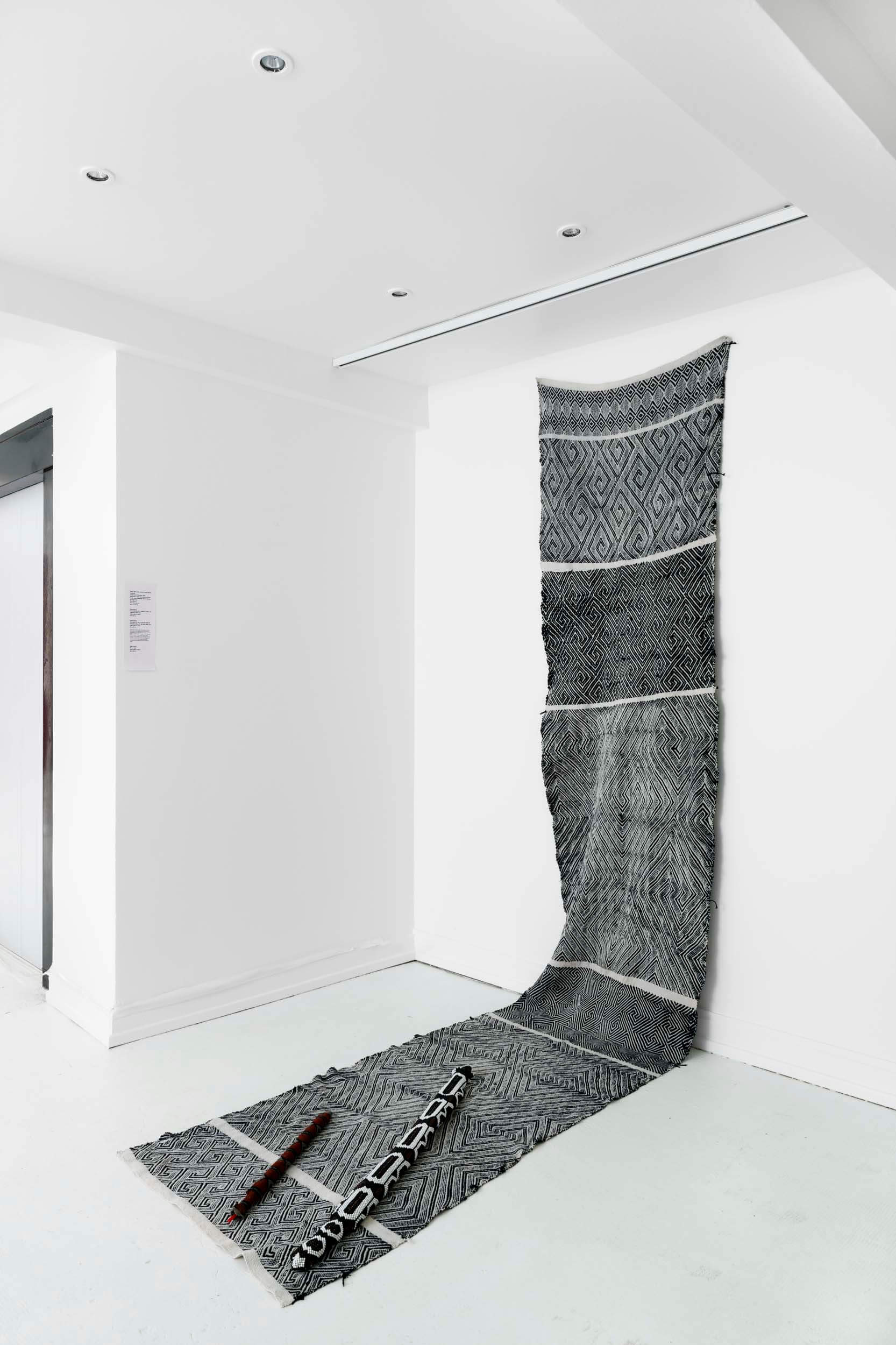 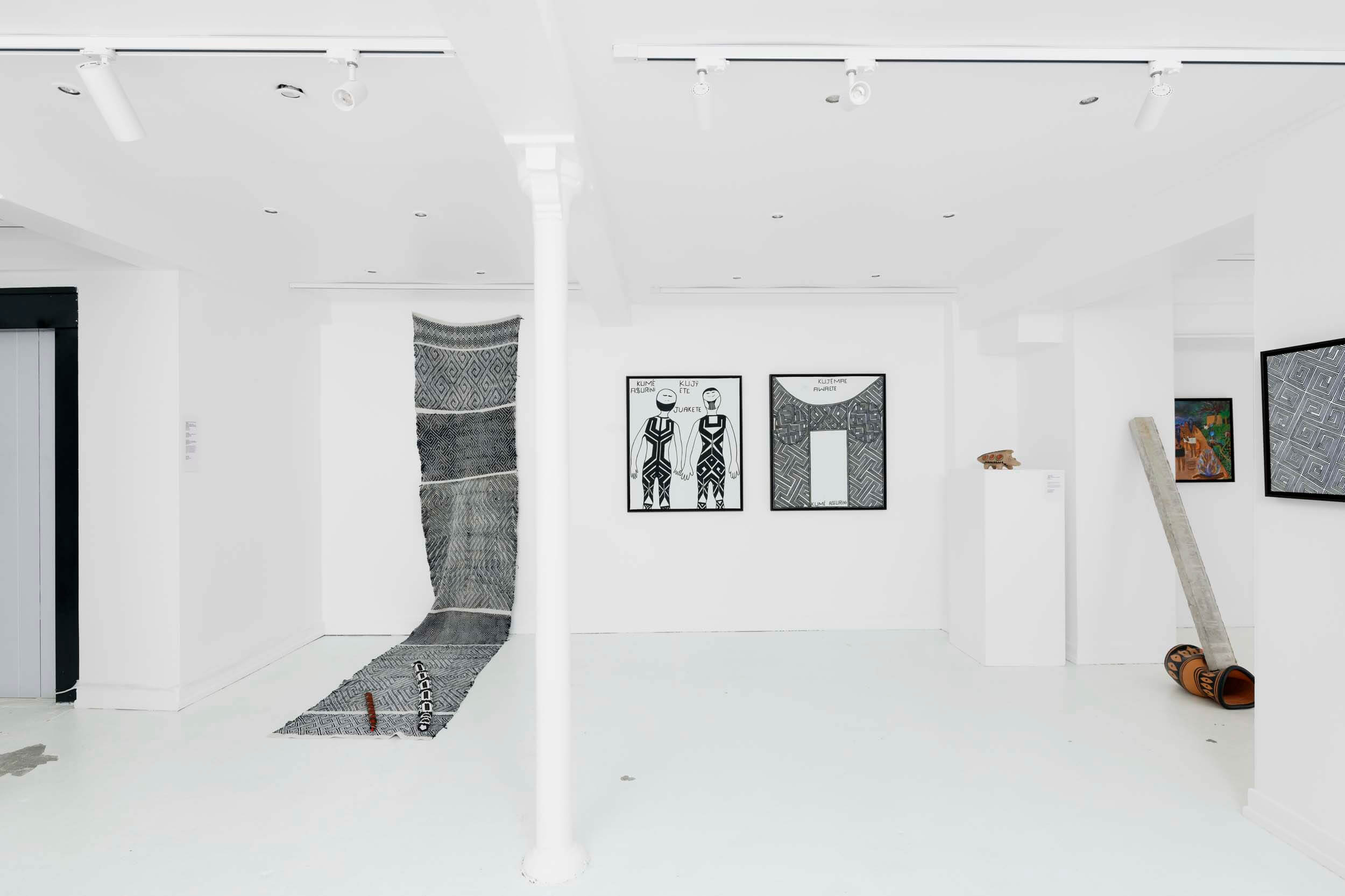 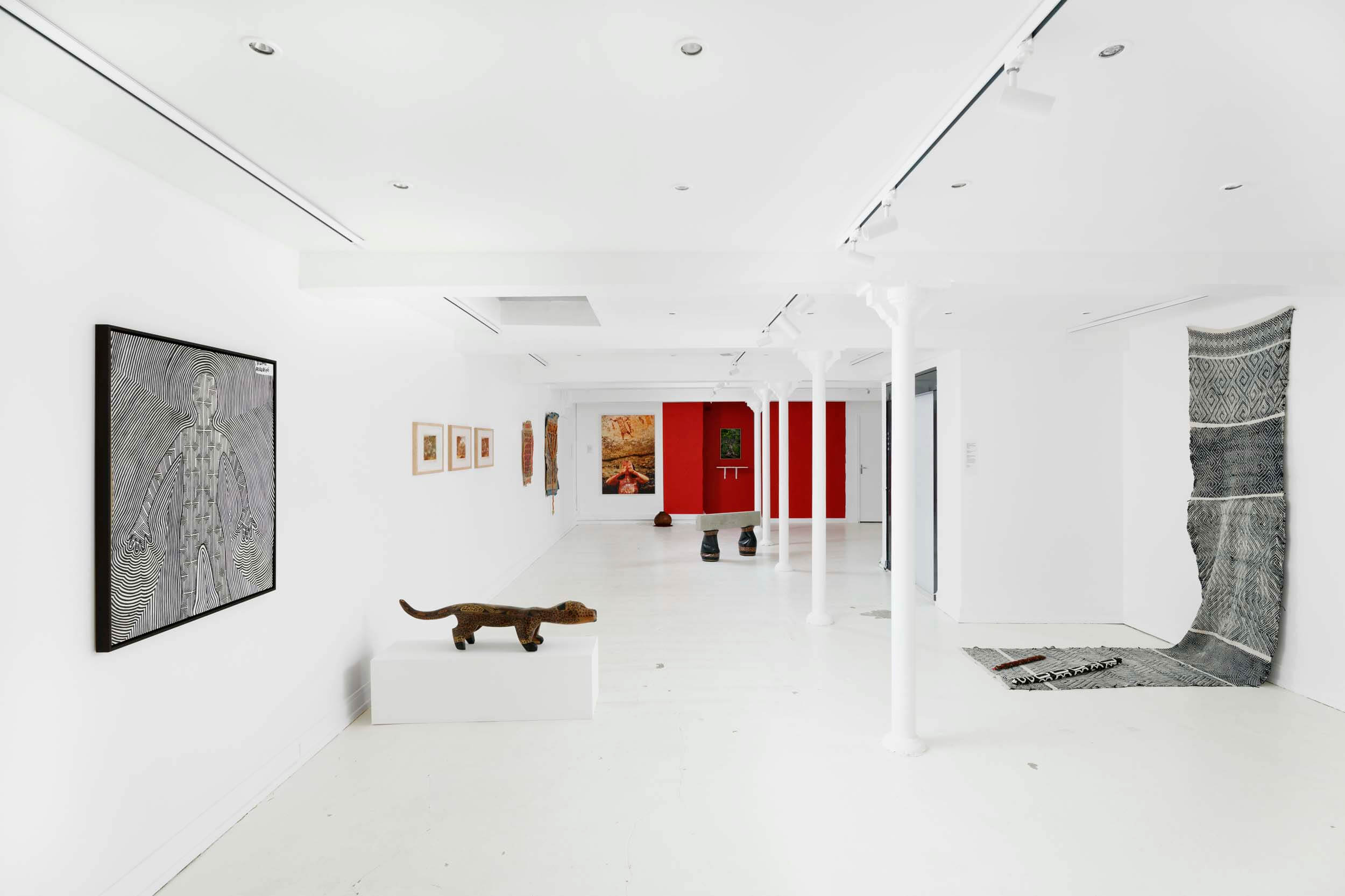 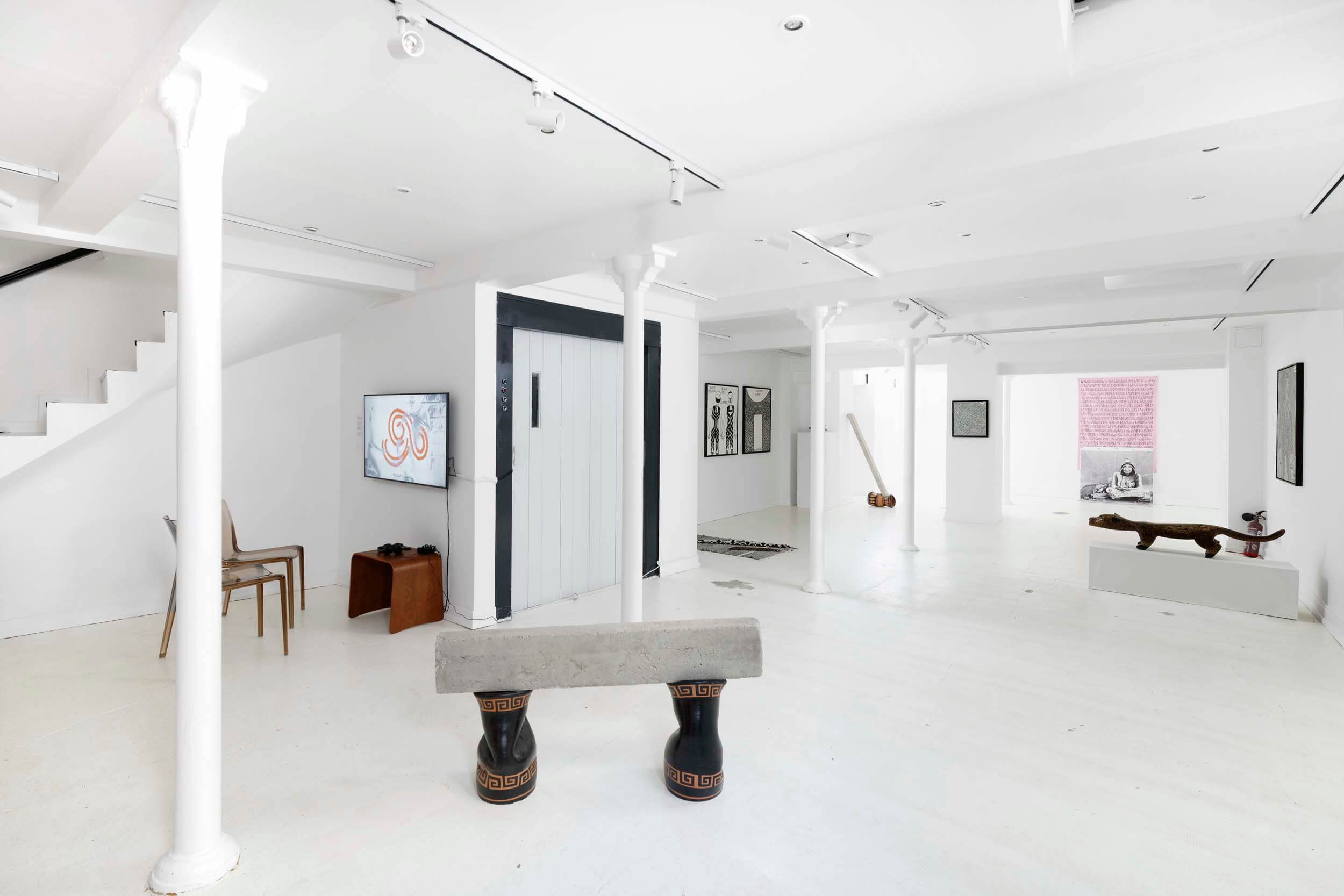 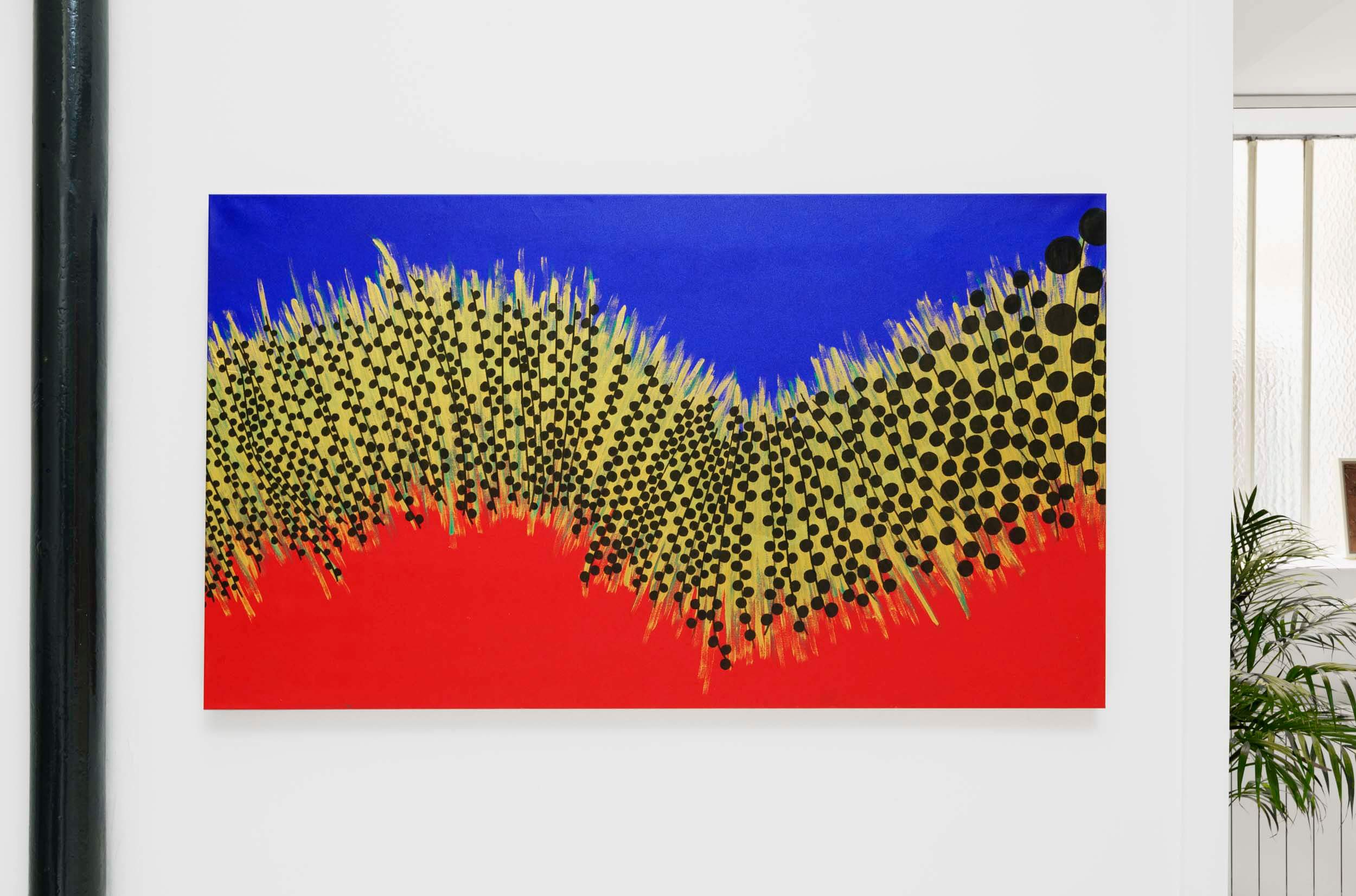